A Brief History of Sunscreen 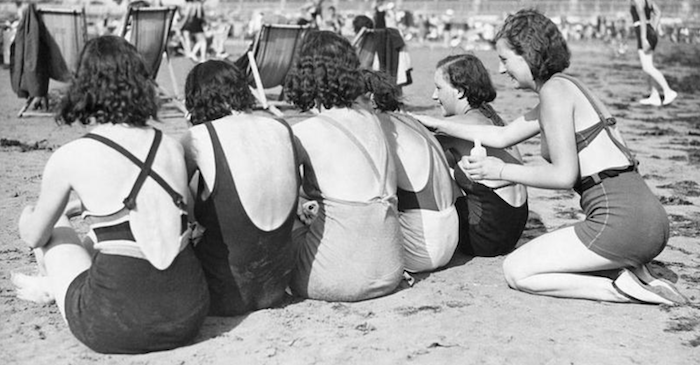 The sunscreen of today, didn’t exist until the last 100 years, but the sun has been around for billions of years. Here are a few of the creative ways humans around the world protected themselves from the sun throughout history.  A brief history of sunscreen if you will.

For centuries, humans have been utilizing the benefits of plants for sun protection and to help soothe the pain when they got sunburnt.

The Ancient Egyptians’ favorite sunscreen was a mixture of rice bran, jasmine, and lupine. Ancient Greeks wore long, loose-fitting clothing and wide-brimmed hats for sun protection, but they also rubbed their skin with olive oil. In the African country of Namibia, the women of the Himba tribe mixed a paste called otjize made of butter, animal fat, and red ochre to protect their skin and hair from the sun. (The Himba women still use otjize, but today, it is used more for cosmetic purposes.) Similarly, women in Burma prevented sunburns with a paste made from the bark of the wood-apple tree called thanaka, while several Native American tribes of the Pacific Northwest use salves made with extracts of the western hemlock tree. Ancient Indians were the first people in documented history to use zinc as a sunblock, as far back as 500 B.C.E.

So, did any of this work? Kind of. Olive oil did little for the Ancient Greeks’ skin than keep it soft and supple, but rice bran absorbs UV rays, wood-apple tree bark effectively blocks them, and zinc is a common ingredient in sunscreen to this day.

The Invention Of Sunscreen

As ingenious as these solutions were, it wasn’t known that UV rays were responsible for sunburns until 1801, when German chemist Johann Wilhelm Ritter discovered ultraviolet light. The first scientific sunscreen experiments were conducted by Austrian scientist Otto Veiel, who learned that tannin applied to the skin could absorb the harmful rays but also stained the skin. Finally, in 1935, Eugene Schueller (who went on to found the L’Oreal cosmetics company) introduced the first commercial sunscreen.