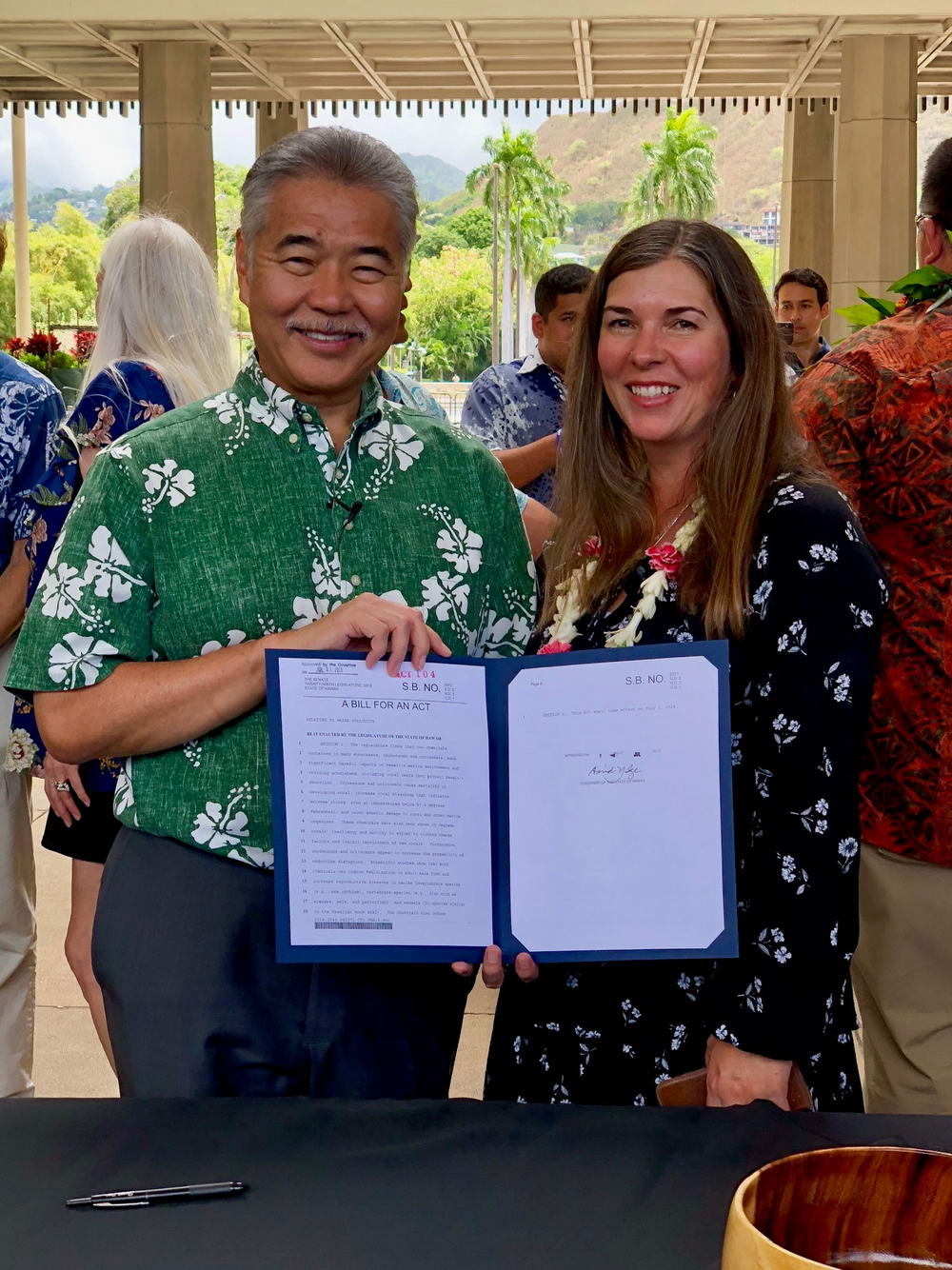 Nova and Governor Ige at the signing of the sunscreen ban into law.

In his speech at the ceremony, Governor Ige said, “By signing this measure today, we will become the first in the world to enact this type of strong legislation to actively protect our marine ecosystem from toxic chemicals.” When he said that, I knew this was the beginning of a movement. To be there to see it happen—and have a role in the process—was incredible! Hawaii is leading the way, and there is already lots of talk about other states following suit.

What’s exciting is that it’s not just states that are getting on board. Some of the big sunscreen brands are taking this very seriously.  My company was featured in a recent piece in Fast Company that also mentioned CVS’s plan to reformulate their private-label sunscreens of SPF 50 and below to be oxybenzone- and octinoxate-free. Some companies are just brushing it off, but if even a few of these big brands switch to reef-safe formulations, it’s a major win!

Of course, I want Goddess Garden to be the brand of choice. We’ve always offered reef-safe formulas, and we’re always going to go above and beyond to ensure our products are safe for people and the planet. But, our ultimate goal is to keep these chemicals off the skin and out of the water. If these ingredients aren’t as prevalent on the shelves—mission accomplished!

To me, it feels like our efforts have made a real difference in the world. For 13 years we’ve been educating the public about how these chemicals effect people and reefs. It’s been a real rally by every definition of the word. We’ve been offering a solution to people who often don’t know there’s a problem. We have done a lot of education and we feel people have a right to know what they’re putting on their skin and in the environment. It’s been a labor of love, driven by a need to protect the things I care about most.

When Hawaii took a stand and banned these chemicals, they simplified the chemical conversation to five simple words: They’re so bad they’re banned. I see this as similar to what happened with BPA. There are people who don’t know how BPA works and why it’s harmful. They just know it is and that they should avoid it. We don’t think people should have to have a degree in chemistry to shop for sunscreen. They should just be able to trust their products are safe for people and the planet. Hawaii is taking a necessary step and making that a lot easier for everyone.

The signing ceremony was the culmination of both a dream and a vision. I fell in love with the ocean years ago when my husband Paul and I traveled to Baja California, Mexico for our first anniversary in our old VW van.

And Mexico is where we first learned some marine sanctuaries were not allowing chemical sunscreens because of what they were doing to the reefs. My husband, Paul, who is a biochemist, really dug into the research on those ingredients. At the time, he said that stuff was so bad it could—and should—be banned. And now, it is!

So again, thank you, Hawaii, from the bottom of my reef-hugging heart. I can’t wait to see where this reef-safe movement will take us, and I’m excited to ride the wave, especially now that that wave will be free from oxybenzone and octinoxate!